A while ago I styled a cheap modern wig from Amazon.com into a regency hairdo. I promised I would write a little tutorial on it, but it took me a while....
So here it is better late than never!
I started out with this wig from Amazon.com
http://www.amazon.com/gp/product/B008R2CBG4/ref=oh_details_o05_s00_i00?ie=UTF8&psc=1 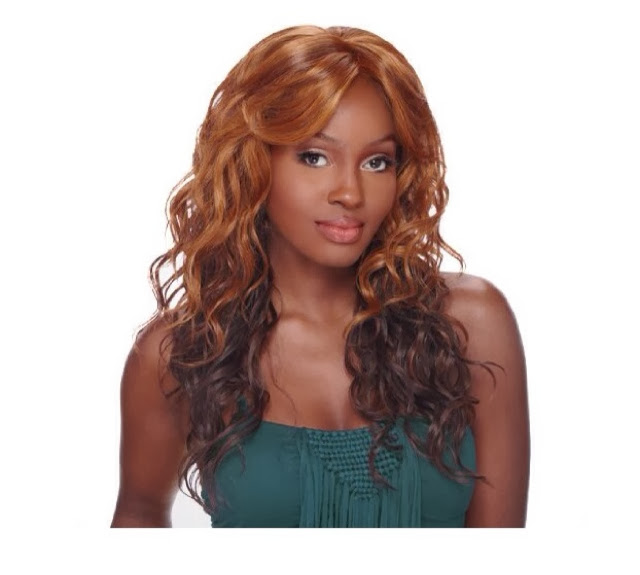 It's a lace front wig that has a natural looking center part and long bangs .The synthetic hair is heat resistant up to 400 degrees Fahrenheit, which means you can actually use heated styling tools on it. it's meant for African American ladies and comes in quite a lot of colors but all of them in darker shades. I chose color 4 which is a natural looking dark reddish brown. I paid $25 for it.
It arrived looking like this. 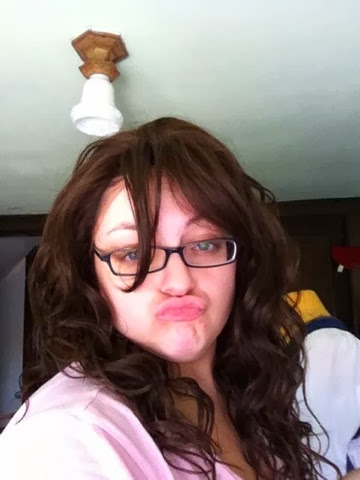 To style the wig I used a tapered curling iron, a heat resistant glove to prevent my fingers form burning, hair elastics, bobby pins, some scissors and a comb. 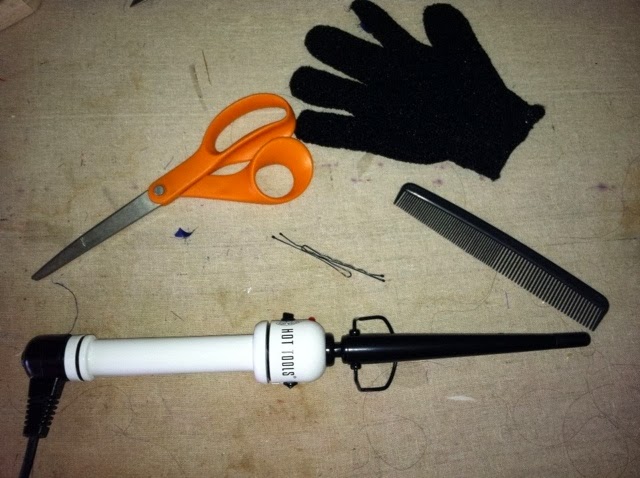 The fist thing I did was to do a horizontal part from ear to ear separating the bangs and some of the front hair from the rest of the hair.Then I took the hair behind the the part and put it in a high ponytail, leaving some tendrils hanging loose at the nape of the neck. 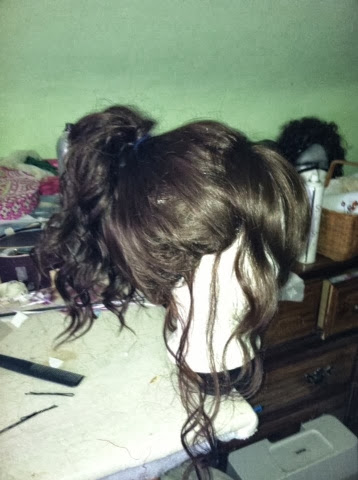 Then I pulled back the bangs and pinned them in place. 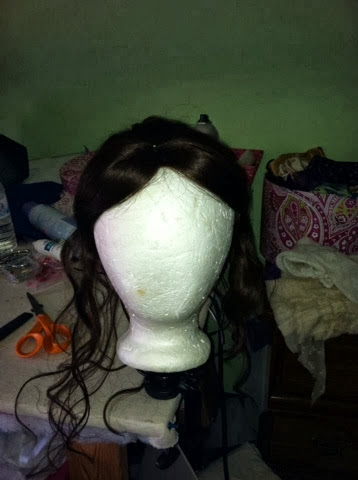 I twisted the ponytail into a bun high on the head, I left some of the hair in the middle of the bun hanging free to be curld later. 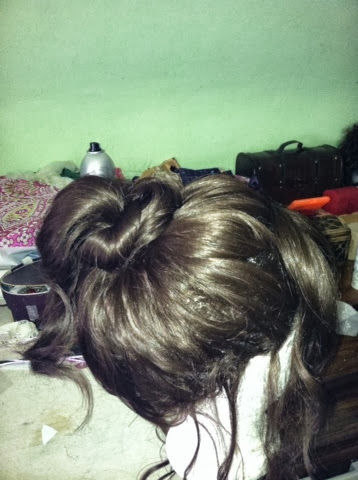 I curled the hair coming out if the bun, then I started curling the front hair. 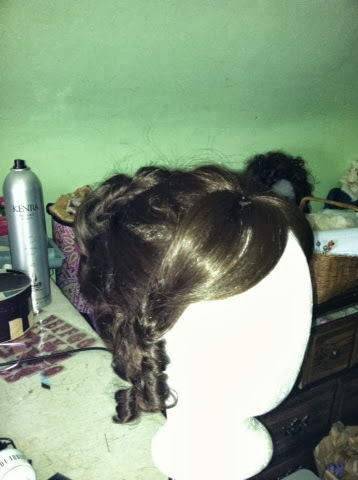 It turns out that curling synthetic hair is not exactly the same as curling human hair. You have to let it cool off to get it to hold its shape. So the way I did it was to warp the strands around the curling iron hold them for about 10 seconds and then to carefully slide the hair off again while holding the curl in shape with my fingers. ( this is where the heat resistant glove is very helpful). Then while still holding the curl I blew on the hair to speed up the cooling process. Once it's cooled let it go and it will hold its shape. If you don't do this the curl will just go limp.
After pinning the side curls into place I trimmed down some of the tendrils I left hanging at the nape of the neck and curled them to make little curly wisps for a more natural look. 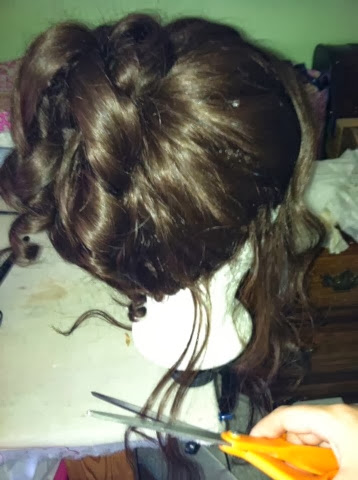 The last thing I did was to give the wig a light dusting with hairspray. And that's it. Voila! All in all it was super easy to, only took about an hour or so and the result is quite nice. I've worn the wig twice now and have gotten lots of compliments on it.
Here's some pictures of the finished  wig worn with and without costume. 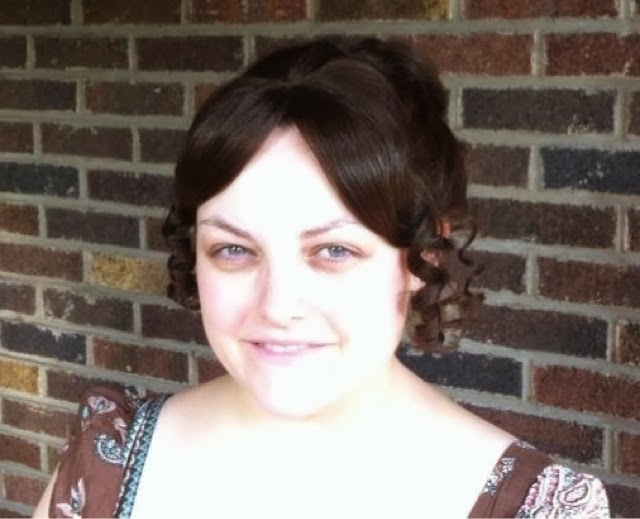 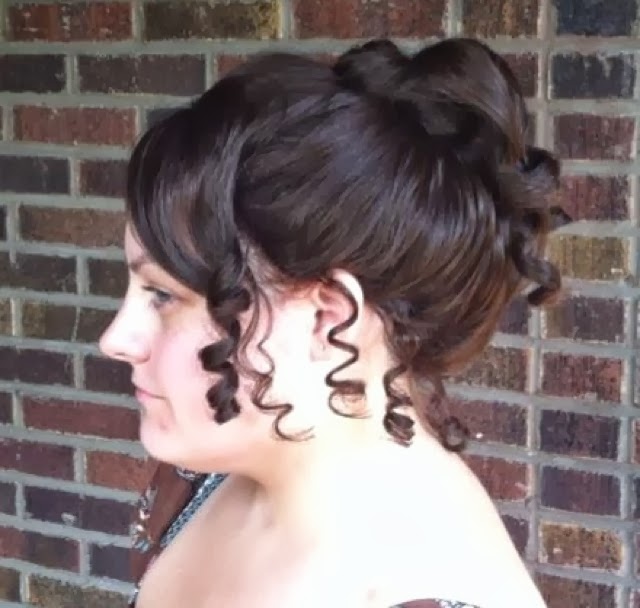 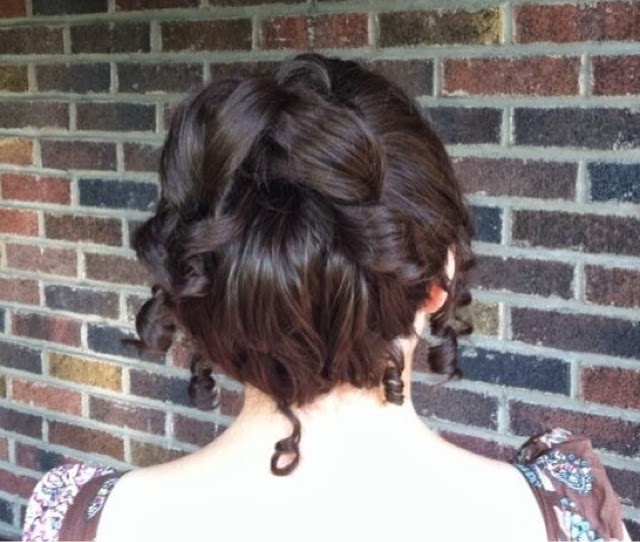 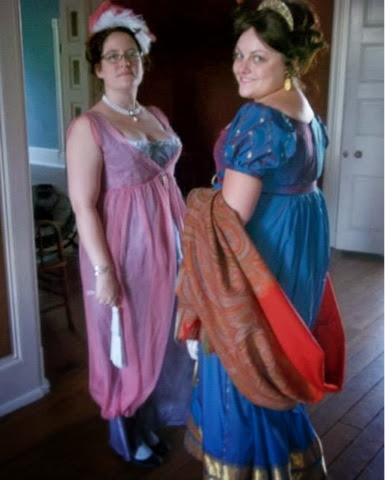 Sorry for the low quality of the pictures they where all taken with my cellphone...
The last picture was taken by the fabulous Toni Tumbrush at a Regency wedding I went to last weekend. Thanks for letting me steal your picture Toni!
So anyway,the wig is pretty awesome and is great for those times when you do not have the time to do an elaborate period hairstyle with your own hair, or if you simply do not have long enough hair to do one. It's surprisingly comfortable  and not really hot or itchy at all as long as it's worn wih a proper wig cap underneath.
Now go style some wigs people!
Posted by The Bohemian Belle at 2:02 PM 16 comments: