Last week I completed my entry for the HSF challenge number 9 Fora and Fauna.
I wasn't particularly creative with this one and chose to make a dress from a floral print cotton that i already had waiting in the stash and had been planning to use for a new dress for a while. with Madame Kat's Jane Austen tea party coming up it was the perfect excuse t make up a new dress. while choosing a floral print dress may not be a stroke of genius  at least the dress itself turned out quite lovely.

The Challenge: Flora and Fauna

Pattern:
Self drafted based on extant garments and fashion prints from the 18teens, i do not know of any pattern either commercially available or in one of the many costuming books that has a dress with the flat fronted bodice so popular in the mid regency so i kind of had to do some guesswork on it's construction. I used a slightly altered version of the pattern I drafted a while ago for my Ingres portrait dress.

How historically accurate is it? Perhaps 60/40  The pattern and fabric and design is period accurate, and all visible seams are done by hand, the ruffles are pinked on the edges which is a period method of decoration. The pinking is  however treated with fray check, while some sort of anti fray treatment was indeed available in period it was certainly not the store bought stuff I used. The piping was store bought and is a poly cotton blend so not accurate either, though piping was all the rage for the 18teens on so the  look is correct, the back closure is a mock button closure with self fabric covered buttons over hook and eye tape. This certainly is not period correct, mock button backs did exist but hook and eye tape did not. i would have done a regular button closure but the fabric was too thick for the button kit i was using and i had to super glue the tops to the bottoms to keep them form popping off, i figured they would not be able to take the stress of actually keeping the back closed, so i decided on a mock button back instead. All non  visible sewing is done by machine.

Hours to complete: not sure, I worked on it for most of last week. all together i spent perhaps 15 to 20 hours.

Total cost:
$25 for the fabric, $8 fr the piping and about $3 for the buttons the thread and hook and eye tape from the stash, so around $36 or so.


I wore my new frock with my humongous puff top stovepipe bonnet that I made at the Lydia Fast bonnet workshop, and at the tea party i added a chemisette and ruff to complete the over the top ruffly look of the mid 18 teens, I call this my blueberry muffing ruffle monster outfit! It rocks!


Posted by The Bohemian Belle at 10:25 AM No comments:

Looks like I am on a blog post roll right now.
This is just a short one however to show of what I made for the HSF Accessories Challenge

I made a pearl beaded early regency reticule.

How historically accurate is it?

Perhaps 80% the fabric, pattern, and silk ribbons are period correct all outside seams are hand sewn, but the inside seams are machine sewn and the pearls are plastic. I'm not sure of the fiber content of the tassel though it did come form India just like the fabric, and that's a plus right?

Hours to complete:  Perhaps 4, the beading took longer than I had expected..

Total cost:  Free!!! The fabric was a leftover scrap from a dress I made for a customer, the pearls ribbon and tassel all came from the stash! 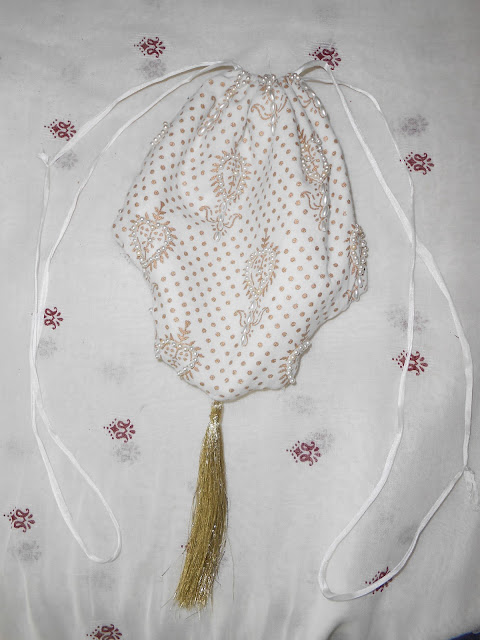 Posted by The Bohemian Belle at 12:48 PM No comments:

I hang my head in shame for not having written a post in over a month. I have the excuse of having been extremely productive these past weeks, but I'm afraid I also had absolutely no blogging mojo....
And what have I been up to lately? Well, a whole lot! Its crunch time for the Louisville Jane Austen Festival. I'm trying to get all my commissions out of the way before the end of May so I can concentrate on personal sewing and lot's of travel in June and July.

In April alone I produced an entire regency wardrobe for a customer. Consisting of 2 different drawstring dresses, 2 open robes and a petticoat ,


I made a set of short stays for another customer,


Made a dress for Charlotte, because we had a reenactment at Woodville and she had outgrown all her reenactment clothes,

I also re trimmed her old bonnet.

Then  I made a lovely new gown for my friend and probably best customer Erin,

Made some lover's eyes,

Trimmed a hat
And last but not least started on a new dress for myself.

Oh and I also made a beaded reticule!


April was a busy month indeed! and may is shaping up to be even worse. I still have a couple of commissions to complete and then i need to make things for sale from the Jane Austen festival as well as some regency clothes for my cousin Regina who will be visiting from Germany in June and will be traveling to to The Heritage Fair at Spencerville with me. So I apologize in advance if you won't hear much from me until after Jane fest. I will try to squeeze in some blogs, but I won't make nay promises!