I have grand plans for 2013. But due to my business going so well lately I fear I will have less time for personal sewing. I'm already nearly booked out for commissions till April at which point I will stop taking commissions until August to be able to build up store stock for the Jane Austen Festival in Kentucky.

But comissions asside I have a couple of things I would really like to make this year.

To start with, I got an extra bonnet kit from Lydia Fast when I took her bonnet making workshop last November. It's a bucket poke style which was very popular in the earlier part of the Regency period. I'm dreaming of  making it in a fresh spring green and trim it with this lovely cream and pink ribbon I've been saving for a special project.


Then of course I need a new wardrobe for the Jane Austen Festival in Louisville. I plan to sport my Lydia Fast bonnets so I will need some matching day gowns. Not sure what I will wear with the bucket poke, perhaps something flowing and drapey Greek inspired for an early 1800's look. I have a lovely white voile with yellow swiss dots in the stash which may make a pretty summer dress worn with a green petticoat.


But I'm not entirely decided on that. I may make something completely different.
The outfit I plan to wear with my blue bonnet however is already all planned out. I got the fabric at last years Jane Fest. It's a lovely wedgewood blue and cream colored cotton print. 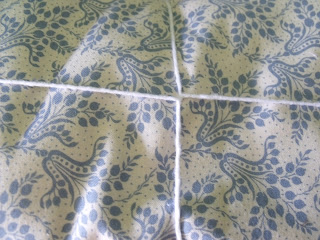 i plan to make a short sleeved 18teens dress with rows of ruffles on the hem. I also plan to make a nice set of undersleeves and a chemisette. to be worn with that gown.

I got a super yummy sheer cotton fabric with a narrow stripe woven in for that purpose at New Boston last year. I also plan to buy some nice stiff cotton organdy and make  a ruff to add to the chemisette.


I think it will be super frilly and ridiculous, but that's what I'm going for!
As for my ballgown for Jane fest I have that all planned out as well! I've got this amazing smokey blue sary with beaded embroidery that I bought to wear to my friends wedding in India. After It has served it's original purpose I plan to cut it up to make a dress.


I think it  will make a superb french empire ballgown. Perhaps I'll add one of those fantastic Josephine collars to it we'll see.

As for non Jane fest projects I hope to be able to finally make some long stays for myself. I started working on a pattern last year but got sidetracked. I've now been commissioned to make a set for a friend and I bought  the mantua maker regency stays pattern to make hers so perhaps I'll be lazy and use that pattern instead of fiddeling with the one I started last year.

I would aslo like to finally do some 18th century sewing. I was planning on making a jacket and petticoat least year.The fabric has just been laguishing in my stash for years now. Perhaps I'll get around to it this year.

Another possible project is a short gown. i got some cute floral fabric for cheap and i think it would make a nice short gown. i can always use some lower class clothes for impressions  at woodville.

I happen to have the same fabri in brown as well and i have enough for a whole dress so perhaps i'll make  a work dress from the brown fabric.

I really need some more outerwear and I have some really nice cashmere wool that I've been hoarding. It is unfortunately a somewhat unflattering color.


I think I will make it into a fur trimmed pelisse . The camel color would look really nice with a darker brown fur.
Then there's this red wool cloak I have been lusting after for months now. I got some medium weight wool on sale a while back, it's sitting in my stash waiting to be turned into a pretty short cloak.


I also have some more red wool that I plan to make a spencer out of ,but I have a feeling that's not going to happen any time soon.
Knowing myself and  with all the sewing I have to do for others I probably won't get around to most of the things on my list. As for my current projects. I'm making a blouse and petticoat to wear with a that sari for my Indian friends wedding!


I'm going on a trip to India next week. So I won't be posting for probably the rest of the month. But I promise a huge post about my adventures in India upon my return. Let's hope my camera doesn't get stolen again like it did in Prague.


Posted by The Bohemian Belle at 11:10 AM No comments:

With the new year beginning today I figured it was high time I wrote a year in review post. My very first blog post was about my costuming plans for 2012. http://www.blogger.com/blogger.g?blogID=6443214960814823384#editor/target=post;postID=9006449727242724640
Some fell by the wayside but I did acomplish most of the things on my list, and then some. I'm only including personal costuming projects in this post since including the mirriads of things I made for sale and on commission would make this post overlong.

So here it is, my costuming year in review.

That's it I think.Somehow it seems to me like all i do is sew but i'm surpised at how few pieces I made for myself this year. I'm happy my business is going well and i have a steady flow of commissions but sometimes i do wish i had more time for sewing for myself. With that in mind i hope i get some more personal sewing done this year, but i sort of doubt it. i have grand plans for 2013 but that'
s for another blog  post! Happy New Year!

Posted by The Bohemian Belle at 2:16 PM 2 comments: