My apologies for the long blogging hiatus. I spent most of August at my parents place  in Atlanta,doing absolutley nothing and being entirely uninspired to blog. Then after coming home I had 5 days to prepare for the Fair at New Boston,http://www.fairatnewboston.org/ so I had no time for blogging.
In those 5 days I manged to complete a  work dress for myself,

make a wrap front gown for my friend Erin.

decorated my new German straw bonnet and make a large fichu from a ruffle that came from an Edwardian net tambour bedspread.

What can I say, I work best under pressure!
After my 5 day sewing frenzy I packed up my camping gear and headed out towards Springfield Ohio to attend the Fair at New Boston. only to get stuck in traffic for over an hour trying to get out of Pittsburgh in rush hour traffic. I arrived after dark to join my friends who had gotten there hours before me and found the camp already set up , and a little canvas wedge tent waiting for me.

I'm really not a big fan of camping and I hate bugs but I will put up with it for the sake of reenactment. Not that a single woman camping with a military unit is very historically accurate unless one is a  hussy or a nurse or something of that sort. If I'm a hussy I'm an expensive one cause I must be kept in style and I always have to have a new dress for every event!


Anyway I digress, I camped with my friends from Woodville Plantation, the gents amongst them portray Wayne's 4th sub legion, the men who where sent by the federal goverment in 1794 to defend Woodville plantation during the whiskey rebellion. My friend Erin and I just kind of tag along to dress up pretty and go shopping. Because shopping is really all that New Boston is about ( for me at least)!


It's a reenacors shopping paradise dozens of suttlers come from all over the country as well as Canada selling everything a reenctor might want from fabric to hand made soap and all in between. Also lot's of yummy food!


The fair officially opened Saturday morning, it was a hot and humid day and  in my boundless vanity I decided that I just had to wear my new dress which is made from a heavy reproduction print, and has 3/4 sleeves, I could have worn my cooler short sleeved green dress, but no, I was determined to give the new one an outing first, since last year there was a huge storm Saturday night and we left Sunday morning before the fair even opened, so I wanted to make sure my new dress got worn in case something like that would happen again! Of course it was miserably hot in the dress but I think I looked pretty nice so all is good.
Saturday passed in a haze of heat and short rain showers that did not break the heat but dampend our clothes.


But it's not all bad I still got to shop and visit with friends and watch the battle of federal troops versus the Natives. Our boys (the federal army, which the fourth was part of) lost on Saturday. weirdly enough to a bunch of Indians and the British navy! Not sure what the British navy was doing in land locked Ohio, I mean there isn't even a river big enough for a boat around Springfield.... I oh well. I think they had some sort of spy game going on.

After the public left there was the annual feast.The fair folk got to have a lovely dinner and have the site to ourselves. But alas instead of the traditional dance and free beer at the tavern it started storming and Erin her husband Mike and myself decided to de camp to the hotel room our fellow camp mate had offerd us after he had to leave early because of a family emergency. I can't even put in words how god that shower at the hotel felt, and the bed was the softest I ever slept on, it was awesome!
The next morning we headed to the free hotel breakfast already in period clothes. we where the only reenactors staying at this hotel and we got some pretty strange stares, it didn't help that Erin was wearing a turban and people probably thought she was a terrorist or something equally ridiculous, We had fun pretending that we where in fact members of some crazy polygamist sect and both married to Mike. I started calling him master and walked 3 steps behind him as is befitting my lowly status as second wife. weirding out the normal people sure is a fun way to start the day!
After breakfast we headed back to camp all aglow after a good nights sleep without getting wet.  A muddy, muggy fair is so much easier to bear on a good nights sleep in a dry bed, And with all that mud I was glad to have brought my boots even if they do pinch somewhat fierce when worn for a prolonged time.
Before the dayly opening ceremonies I headed over to the british camp for a chat with Maggie a friend and fellow blogger over at http://missemilywaterman.blogspot.com/
We talked  for a while, and she mentioned to me how she did not feel up to going to the opening ceremonies. Good thing her friends talked her into going, because her great love Albert Roberts more commonly known to reenactors as the Doctor popped the question at the opening ceremonies in front of the entire assembled fair and in character, what a surprise! She accepted of course. I  wish them all the best and a happy life together.I wonder if they will have a fabulous regency wedding, the kind i could only dream of since i could never get my own man into breeches and top hats!
Most of Sunday past much like the previous day the weather was a bit cooler and rather cast over.

Around noon my friend Melissa  arrived wearing regular clothes because she did not want to soil her white regency dress in the mud. And a good thing it was since this meant I could press her into service taking pictures of the fair for me. As a participant I am not allowed to have anything modern on me while in costume, which means that taking pictures is pretty much impossible especially since I have a hunking big camera. But luckily Melissa agreed to take some pictures for me with my camera, I bribed her with some home baked pumpkin bread ! So thank you Melissa you made this blog post possible, cause what's a blog post without picture,s and she took some really lovely ones at that!


After some more shopping and general meandering about we headed over to watch Sunday's battle, this time our side won.

Of course it's all scripted we get to win one day and loose  the other. After their victory the fourth sub legion headed to the flag pole to bring down the British flag that had been raised below the American one. Though I was unaware of this and missed the whole commotion. This was unscripted I'm not even sure the British noticed.....good thing it's just pretend war! Shortly after the battle Melissa left and I started packing stuff up before heading  to the closing ceremony.
During the ceremony they announced that the French lace maker M. LeFarceur de Villeverte won't be coming back to the fair next year, which really is too bad because I just love him, he is so arrogant and snooty and so very very french.


The fair won't be the same without him! But he does have a kick ass tent perhaps I can buy it from him after he retires!


It was a good thing I had packed most of my things before the closing ceremonies because it started pouring shortly after, cutting short my good byes.
I must say I had a good time despite the weather and my sore feet, but the best part of spending 2 days in the 18th century is coming back to the 21st!
And so I leave you with some of Melissa's pretty pictures. and a promise to blog again very soon with a big announcement! 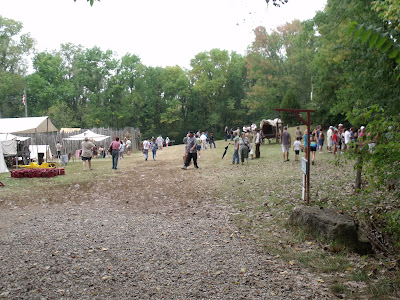 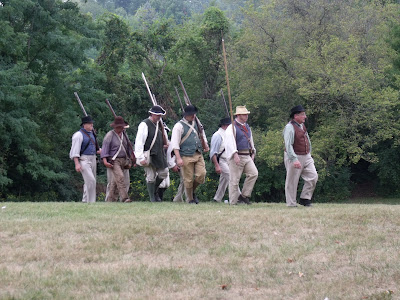 Posted by The Bohemian Belle at 10:17 AM